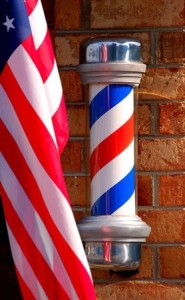 The earliest records of barbers show that they were the most important men in their community.  Barbering services were performed by Egyptian nobility and their crude instruments were usually formed from sharpened flint or oyster shells. 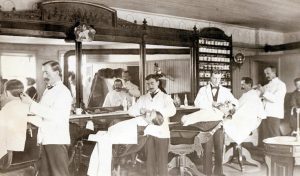 Sometimes the word “tonsorial” is used to refer to barber shop services.  It derives from the Latin noun “tonsor” which means clipper and the verb tondere meaning to shear.

Further a “tonsorium” is a place where trained barbers, or tonsorial artists, perform their craft.  So in today’s language, a tonsorium would be the same thing as a barber shop.

It is a well known fact that in the middle ages barbers not only did haircuts and shaves, but they also were known as medical practitioners.  For centuries barbers performed both functions and were known as barber-surgeons.
.

One of the funniest skits that was ever performed on SNL was Vlad the Barber where Steve Martin was Vlad and Dan Ackroyd was his loyal assistant.  When the character of Brunhilda came in for a bleeding,  the more they bled her the whiter she became.  With blood spurting everywhere, she predictably died and was thrown out back with all the other patients who didn’t make it. 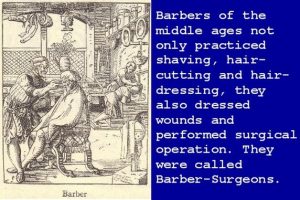 These two professions were finally separated in 1745 when they were legally split into two different trades.  The barbers kept the pole as their identification.  When people ask about the creation of the “barber pole” it is quite interesting.  The red, white and blue stripes are symbols for blood (red), bandages (white) and veins (blue).  The barber pole today is one of the very best known symbols in the world.
. 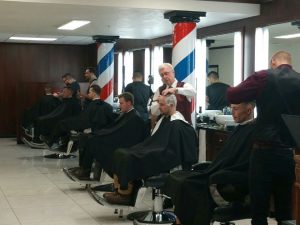 Since the mid-1800’s barbering has become much more professional.   In 1897 the state of Minnesota passed legislation for a barber license.  Barber schools appeared and training and inspection of shops became more and more the norm.
.
Today barbers are highly trained, licensed and inspected by both state and local agencies.  When a man walks into a barber shop, he can expect a clean establishment, trained barbers and a very professional experience.  Obviously the level of skill and professionalism can vary greatly between different shops in Salt Lake City.
.
Trolley Square Barbers is a barber shop which provides all the traditional services that most shops do not perform.  Certainly not the women’s salons and the quick-clip joints.  A client can receive a traditional haircut, a straight-razor face shave, a deluxe beard trim, a hot-towel head shave with straight razor, scalp treatments, professional grooming products and even a professional shoe shine while you wait or you can drop them off and pick them up later.