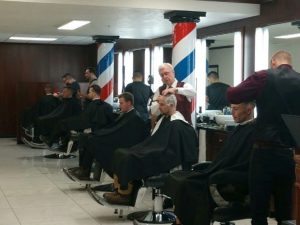 When I was a young man it seemed to me that shoe shine stands in barber shops were not uncommon.  At least that was true in the better or upscale barber shops.

I remember how impressed I was by this “gentlemen’s service”  which could be found in the nicer barber shops of that time.   It made me feel important that I went to a barber shop which also had a classic shoe shine stand to offer its customers.

The Vigo County Historical Society Museum has a beautiful old-fashioned shoeshine chair, which used to reside in the 12 Points Barber Shop.  Have you noticed how rarely you find shoe shine stands in barber shops these days?  Earlier generations of men were used to having the option of getting their shoes shined while getting other barber services.

“A few weeks ago, while rushing through an airport terminal to make a connecting flight, something caught my attention  and stopped me in my tracks — shoeshine chairs, along with attendants calling out to folks, inviting them  over to have  their shoes polished. I looked down at my own feet and shrugged. I was wearing flip flops, something  comfortable and  easy to travel in.

As I made my way to my boarding gate, I began thinking about the past — a time when shoe shining had been a regular practice. Nice dress shoes were expensive, and the owners of those shoes would take the utmost care of them to make sure that they looked as fresh and new as possible, and to make sure that they lasted, as it would more than likely be a while before they were able to afford the luxury of a new pair. In some families, those shoes would be passed down from one family member to the next, as new shoes for the entire clan was not an option for the average American household, so care of those shoes was crucial. 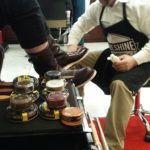 In the past, shoeshine chairs could be found in barber shops. A gentleman could stop into the shop, get a haircut for 15 cents, a shave for 10 cents, and a shoeshine for a nickel, then be on his merry way. He would leave that shop looking fine and polished — something important to a man of that era.

Thanks to a generous donation from Jack and Rosetta Fagg, The Vigo County Historical Society Museum has a beautiful old-fashioned shoeshine chair, which used to reside in the 12 Points Barber Shop. When visiting the museum, let yourself drift back to a period when a shoe shine chair would have been the norm in any barber shop; back to a more relaxed way of life. And the next time you’re traveling by plane, wear your best dress shoes, give yourself a little extra time and get your shoes shined.”

In The Sartorialist magazine I found this statement about shoe shine stands in barber shops, “Recently there has been a big, bordering on huge, trend towards old school barber shops opening in New York City. I would love to see an equal re-emergence of shoe shine stands. Maybe they should be inside the barber shops (hint, hint). I mean, I’m doing nothing but looking at old magazines while I wait for my turn anyway, why not get a shine!”

Another Sartorialist quote said,  “Interesting you mention shoe shine stands in barber shops; right in downtown Savannah–on Bull near Broughton–is a small, old-style barber shop with an old shoe shine guy who has become a fixture.

“Look around the city of Jennings and you’ll note that the business of barbering is disappearing.  Before the business of barbershops began to disappear, it was customary in better locations to have shoe shine stands in barber shops.  Jennings had its own Shoeshine Jack, as he was named, who worked in Willie Regan’s Barbershop on Main Street.  Jack had a custom of offering a silver dollar to every young baseball player who hit a home run for the high school team before it disappeared, before reappearing in 1976.

Now, very few shoeshine men exist, but a Lake Charles shoe expert raised his family and sent two through college shining shoes when the price of a shine was 50 cents. 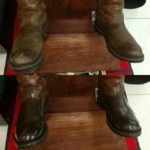 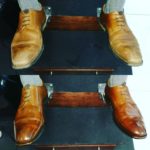 The barbershop has always been a gathering place for men to bring their tales of woe or their laughs to share with friends.

The two-chair shop, as once was the case in Jennings, down-sized to the one-chair shop as seen on the famous Andy Griffith Show “of the late 1950s and early 1960s.”

Many shoe shine men like Shoeshine Jack later brought their business to the streets when barbershops down-sized and younger customers began allowing their hair to grow longer.

Barbering is almost a lost art, and only a rare breed of the “best” shoeshine men remain, usually in the metropolitan areas.  So what will men do to get a haircut and a shoeshine – something men have taken for granted?

Many men are already going to ladies’ beauty salons to get their haircuts, and are shining their own shoes.  It’s just the opposite for women than for men – women don’t have problems becoming beauticians and either working in partnership or owning their own shops.  It’s often sad to look around and see how the complexion of a city or the world changes with time, as one art disappears and another takes its place.”

“The shoe shine stand was once a common sight in the barbershop. In the ’50s and ’60s, the White Oak Barber Shop on Dayton Blvd. had a shoe shine stand. Well, those days are back at the Red Bank location.  Drop off your shoes or have them shined on your feet.  We are excited to offer this service again.

Preserve your leather shoes with proper nourishment and they will look good and last for years.  At the White Oak Barber Shop our shoe shine tech will clean, polish and nourish your shoes and boots. They always use at least three coats of polish. The first two coats nourish the leather, and the third coat of gloss polish makes them look like new.” 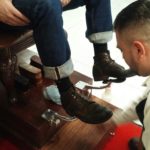 It is an old-style, traditional gentlemen’s barber shop offering many services which were lost in an era of women’s salons and quick-clip stores.

Gentlemen can have their shoes shined while they wait—or they can drop them off and pick them up later.

Either way it is a great new service at Salt Lake City’s newest traditional gentlemen’s barber shop at Trolley Square.

Come in and check it out.   Discover lost services which  your father and grandfather enjoyed!

This is a traditional barber shop which discerning Gentlemen in Salt Lake City should be able to recognize and appreciate.

Electrolysis or Laser Hair Removal For Men? When it comes[...]

How Many Downtown Barber Shops Have FREE Parking?

How Many Downtown Barber Shops Have FREE Parking? If you haven’t[...]