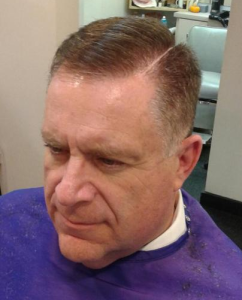 For several years I was hesitant to cut the hard part into a clients hair.  I was afraid that I might make a mistake that would take a long time to grow out.  The hard part is a definite commitment to a hairstyle for at least several weeks.

I wanted to do one but I didn’t want to risk learning on one of my valued clients.  On occasion I suggested it to clients who I thought might look good with a hard part, but without exception they were hesitant to take the chance.

A hard part is a part in the hair where the barber doesn’t just comb in the part, but actually cuts it into the hair with his clippers, trimmers or even a straight razor.   It is a vital part of many of today’s more aggressive hairstyles.

About six months ago I started having a number of younger clients asking for a hard part in their hairstyles.  I swallowed hard and took my trimmers and began exploring the unknown.  To my pleasant surprise it was not hard at all to cut a nice, clean part into this clients hair.  I anxiously awaited his response to my first effort.  He was very pleased and that gave me the confidence to do more and more of them after that initial experience.

Now I find myself suggesting them to many of my clients.  There are more conservative, subtle hard parts for a business man who only wants a crisp look in his part.  The other extreme is the wider, more aggressive part where possibly clippers are used as well as a straight razor to clean out the hard part.  The photos on this page show a variety of parts from the conservative to the aggressive.

The clients who request the hard part most often are styles such as fades, spikes and undercuts.  However, I think that it would enhance most hairstyles if done carefully.  I have not had a single client who was not really enthusiastic about the crisp contrast which they achieve with the this part.

My only regret is that I wish I would have started using it many years ago.  I have been reflecting about many clients who would have looked great with a hard part.  But my caution was perhaps understandable. 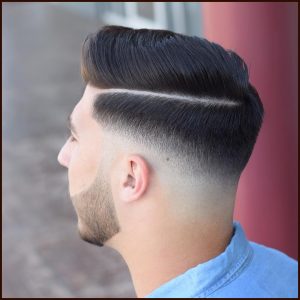 I have heard many horror stories about men who tried to do this at home and really made a mess of their hair.  It is probably something that is best left in the hands of a professional barber who does this type of work every day and also has the best tools for the job.

I had a client come in this week who was concerned that the part I cut into his hairstyle would fill in quickly when his hair grew back.  He thought he might be getting in for a lot of maintenance work to keep the hard part looking clean and crisp.  I was really pleased that, in his case, his hard part was still looking good one month later.

I had not really paid attention to how well the parts I had been cutting into clients hair were holding up between cuts until this young man.  But in his case he was very happy with the results and he had not done any maintenance work between haircuts.

I am going to pay more attention in the future with other clients to how well the clean lines of the hard part hold up between haircuts.

If you haven’t tried experimenting with a hard part in your hairstyle, you might consider giving it a try.  My experience as a professional barber is very positive based upon six months experience and lots of happy customers.

Classic Face Shave: A Must For Every SLC Man!

Why Every Man Should Experience A Classic SLC Face Shave[...]

7 Things Not To Do At A Man’s Barber Shop

Pinaud Clubman:  Serving Gentlemen Since 1810 I have been using[...]