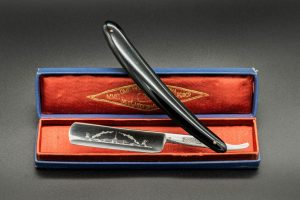 Beautiful Vintage straight razor on its own box

Straight-Razor Nostalgia has been going around for some time now.  Men have become fascinated with a previous time period where a great deal of attention was devoted to classic shaving techniques.  At Trolley Square Barbers in Salt Lake City we hear comments almost every day about the Straight-Razor Nostalgia and what we think about it.

The rise of retail shops like The Art of Shaving across the country is indicative of this nostalgia.  They are a high-end shop carrying every imaginable shaving product at one location.

When I have been inside their store I see a number of men looking for traditional shaving products.   It seems obvious to me that there exists great interest in nostalgia among men from various interests and backgrounds.

Straight razors were the most common form of shaving before the 20th century and remained common in many countries until the 1950s. Barbers were specially trained to give customers a thorough and quick shave. 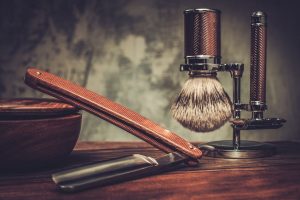 Straight razors eventually fell out of fashion. Their first challenger was manufactured by King C. Gillette: a double-edged safety razor with replaceable blades. These new safety razors did not require any serious tutelage to use.

The blades were extremely hard to sharpen, and were meant to be thrown away after one use, and rusted quickly if not discarded. They also required a smaller initial investment, although they cost more over time.

Straight razors are still manufactured.  DOVO of Solingen, Germany, and Thiers Issard of France are two of the best-known European manufacturers. Feather Safety Razor Co. Ltd. of Osaka, Japan, makes a razor with the same form as a traditional straight, but featuring a disposable blade that can be installed through an injector-type system. 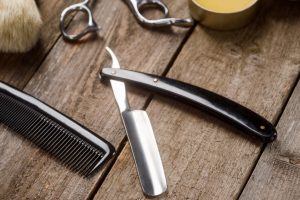 It is my personal opinion that the best straight razors are made by German or Japanese companies.  I use both in my shaving as a professional barber.  It comes down to a matter of personal preference to me because they are both so excellent.

If a customer who is smitten with straight-razor nostalgia asks for a recommendation,  I tell them they should look at both German and Japanese razors and blades.

Modern straight-razor users are known to favor them for a variety of reasons. Some are attracted to straight-razor nostalgia of using old and traditional methods of shaving. Others wish to avoid the waste of disposable blades.

Still others argue that straight razors provide a superior shave through a larger blade and greater control of the blade, including the blade angle.

Straight razors cover a much greater area per shaving stroke, because their cutting edge is much longer than any of the multi-blade razors.  They also do not have to be rinsed as often, because their blade acts like a scoop and carries the lather on it during multiple shaving strokes, while the multi-blade razors are not nearly as efficient at such a task because of their considerably smaller blade geometry.

Straight razors are also much easier to clean and can handle tougher shaving tasks, such as longer facial hair, than modern multi-blade razors, which tend to trap shaving debris between their tightly packed blades and are easily clogged, even with relatively short stubble.  In addition, multi-edge razors can irritate the skin due to their multi-blade action, and this can lead to a condition commonly known as razor bumps. One of the recommended actions for those so affected is to switch to single blade use. 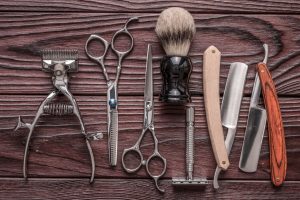 Others simply like the good results and the satisfaction of maintaining the blade themselves.  Yet others cite aesthetic reasons in addition to the practical ones. A well-made blade, in a nice handle with a well-crafted etching and decorated shank, carries a sense of craftsmanship and ownership difficult to associate with a disposable blade cartridge.

Finally, a well-kept razor can last for decades and can become a family heirloom that can be passed from parent to child.  I had a customer bring a straight razor into the shop which belonged to his great-grandfather.

He kindly gave it to me because he didn’t know how to use it and thought that I might be able to put it to good use.  For all of these reasons, devotees of the straight razor make for an active market.

The increase in sales is part of an overall growth in straight-razor nostalgia over the past three years which has also seen an increase in the number of professional barbers offering straight razor shaves.