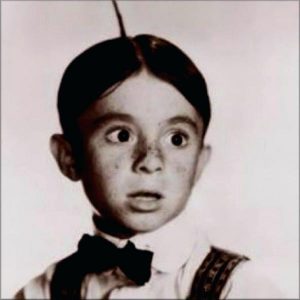 Probably the most famous of pesky cowlicks ever belonged to the Little Rascals TV character named Alfalfa.  His famous tuft of hair sprouting up from the crown of his head was recognized instantly by a generation of viewers. But what exactly are cowlicks?

If you ask any barber in Salt Lake City they would tell you that  pesky cowlicks are a section of hair that stands straight up or lies at an angle at odds with the style in which the rest of an individual’s hair is worn. Cowlicks appear when the growth direction of the hair forms a spiral pattern.

The term “cowlick” originates from the domestic bovine’s habit of licking its young, which results in a swirling pattern in the hair. The most common site of human cowlicks is in the crown, but they can show up anywhere. They also sometimes appear in the front and back of the head. These pesky cowlicks are also referred to as a “hair whorls.”

Hair on the back of the head usually grows in a circular flattened pattern from a central point, but this can also occur on facial hair in men.   The definition of a whorl  is hairs that rotate round an axis. The point where we find the hair whorl is the spot where the hair changes direction.

As a professional barber in Salt Lake City, I see all types of cowlicks in men of all ages and types of hair. Some are extremely difficult to deal with, while others are a minor inconvenience. Many customers ask me what they can do to help control this unruly hair growth called cowlicks.

There are several methods of taming unruly cowlicks. For most people, a combination of the right hairstyle, length, product used, and styling technique can overcome the appearance. 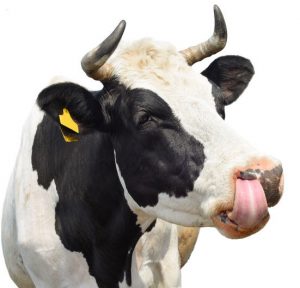 Not this sloppy “COWLICK” — Just Kidding!

What should you do with your cowlicks?  To control cowlicks at the back (crown) of the head, you’ll either need to (1) leave the hair long enough so the weight of the hair holds it down or (2) cut it short enough so it doesn’t stick up in the first place.

Examining the direction of the hair growth can also be helpful. Often cowlicks will pop up as a result of trying to style the hair against the growth pattern and simply brushing the hair in the opposite direction can fix the problem.

To control cowlicks at the front of the head we have the same two options–cutting is very short so that it doesn’t stick out all over the place, or growing it long enough so that the extra weight helps hold it down. Also, if it is long enough it may grow into “connecting hair” which may help hold it in place.

You also may try styling the hair in the direction of the cowlicks growth pattern to help control it. Some strong hair products can also help to give additional control.

For guys with bad cowlicks, ask your barber or stylist to cut the hair dry so there’s no water weight on the hair that will unnaturally hold the cowlick down. You should also ask your haircutter for recommendations on the best style to help minimize your cowlicks. A short, buzzed style normally works, but a longer layered style or messy textured cut can also be great options too.

To summarize solutions to men’s cowlicks there are two choices: shorter or longer.  If you cut is shorter and it works you hit a home run.  It can often be the perfect solution.  But if you are wrong–it can be really bad because the hair will porcupine and stick out like crazy.  The only solution to this is to let it grow out again.

If you let it grow longer you have two advantages.  First, the weight will help hold it down and second, the longer hair will probably be able to intertwine with what is called connecting hair to help hold it down.  The possible problem with longer is that sometimes the hair will balloon and look “poofy” to use a professional term.  Sometimes thinning shears can reduce the poofy look but sometimes it is something you have to live with.

From the barbers point of view the more risky choice is to cut shorter.  It can be a home run or more often a bust.  So the safer choice is to cut it longer and deal with the poofy look.  Understanding these choices might help you to deal with your cowlicks a little better than before.