The single blade safety razor has been one of the most frequent discussions about men’s shaving the past several months at our downtown men’s barber shop in Salt Lake City.  Because we are a full-service traditional barbershop offering hot steaming towel face shaves, customers frequently ask me what I think about the current popularity of the single blade razor. 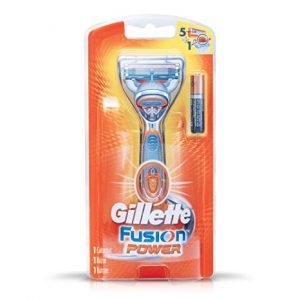 The standard in my lifetime for men’s shaving for those who wanted the wet shave experience has been the Gillette multi-blade cartridge razor.  I can barely remember the single blade safety razor that my father used and that I started shaving with.

When Gillette started advertising a double-blade razor in a cartridge, I bought all the hype and started using them. After many years they changed to three blades in a cartridge….then four blades and now finally five blades in each cartridge of the Gillette Fusion.

I felt the cost was ridiculous!  I also have felt recently that my Gillette blades were of a cheaper quality than they used to be because they didn’t last very many days and I had to change them. 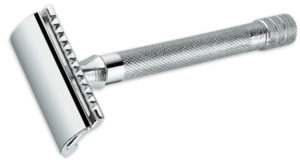 I just priced a pack of 4 cartridges at Walgreen’s for men’s shaving and they were $20.00 each.  The fact that Gillette has produced lower quality blades (in my opinion) and higher and higher prices might be one reason that many men are looking at single blade safety razors again.  I get four or five people each week asking questions about the single blade safety razor.

This is a modern version of the old safety razor that my father used.  I purchased this exact model–the Feather razor and blades.  You might be surprised to know that my total cost was only $17 for everything.  A pack of 100 new blades can be purchased for as low as $6.48 on Amazon.  I noticed that there could be a huge cost savings involved with the switch back to the single blade safety razor.

When I first started using a single blade safety razor for men’s shaving again after many decades of using the Gillette multi-blade razors it felt a little weird.   It felt so different that I almost gave up after the first shave. But I wanted to give it a fair test so I kept shaving with it and it started to feel much better each time I used it.  It took me a little longer at first because I wasn’t used to shaving with a safety razor again.

I soon realized that when I used it to shave on Saturday mornings when I was not in a hurry, I started getting some very close and nice shaves.  It actually surprised me because those first few 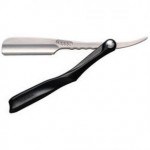 shaves were not so great.  But when I gave it a chance and went through the learning curve for men’s shaving I was actually getting a close and satisfying shave with the single blade razor.

ABC News offered this quote on the hype of multiple blade cartridges, “Guys who buy these razors and blades are spending a lot of money for something that really doesn’t do much better than the two-bladed shavers,” said Dr. Bruce Katz, a dermatologist. “The question is whether they do any better than a three-or four-bladed razor. And from my opinion and from the reports I get from my patients, there really is no difference.”  Katz thinks it’s kind of a guy thing. “My shaver is bigger than your shaver.” 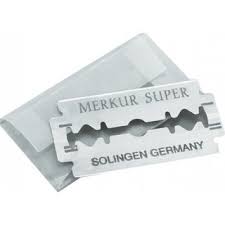 Another advantage in men’s shaving of using a single blade safety razor is the reduction or razor bumps and ingrown hairs.  The Mayo Clinic says shaving hairs close to the skin surface causes the hair to curl and grow into the skin instead of exiting the follicle. The inflamed bumps form as a reaction to the hair trapped under the skin. If you are prone to ingrown hairs, consider a shaver that will help prevent these painful outbreaks.

“For men with extremely curly hair, double-edge razors offer one of the best solutions to avoid ingrown hairs and associated “razor bumps,” according to Corey Greenberg, contributor for NBC’s “Weekend Today.” He also suggests using a badger hair brush to apply shaving cream. The bristles gently exfoliate the skin to reduce the instance of ingrown hairs. If you constantly suffer ingrown hairs, forgo shaving for a few days to let the bumps heal, then switch to a double-edge razor.”

After lot’s of interviews with clients and other research,  I have come to the conclusion for men’s shaving that more men should give the “old fashioned” safety razor a try.  This is for several reasons.

First, there is a huge difference in cost of shaving.  The five blade razors have just priced themselves out of most people’s budget.  The quality of the blades has gone down at the same time the cost has gone higher and higher.  I can buy 100 double-edge blades for under $7 and if I only average one blade per week (remember there are two cutting sides), I can get almost two years of shaves for only seven dollars.

Second, if you have had any problem with ingrown hairs, consider changing immediately to the safety razor.  Evidence shows from multiple sources (more than I have cited here) that the multiple-blade cartridge razors can increase the incidence of ingrown hairs—and that switching to a single edged razor will help the situation very much.

Third,  there is mounting evidence that a single blade can give you a closer shave. You must give yourself time to go through the learning curve with the safety razor.  I didn’t especially like it at first, but it quickly grew on me.  I learned how to use the safety razor to get a closer shave each time I used it.  Don’t judge it by your first shave…but give yourself time to get used to it. You might be glad you did!

Straight Razor Shave v. Classic Face Shave Many of our[...]

7 Things Not To Do At A Man’s Barber Shop

High West Beards manufacturers some of the finest beard balms,[...]