When I was in barber school I had an older gentleman get in my chair and tell me something about nose & eyebrow hair which I have not forgotten.  He said, “Sonny…do you know what happens to the hair on top of your head when you get old?  The hair on top slows down its growth and then moves down into your nose & eyebrow hair and then it grows like crazy!”  Even though I laughed at that time, I have observed that over and over again in almost all men since that time.

This chart gives an approximation of what happens as men get older.  Many young men start growing a beard at least by the time they are 15 years old.  Then at about 25 years men start growing nose hairs at a faster rate.  At least by 35 most men start getting faster and faster eyebrow growth and at least by 45 those notorious ear hairs are sprouting like weeds.

Because it happens with such regularity and in almost all men, it always seemed to me that it must be genetic.  I have seen many older men with so much hair growing out of their ears that it is a wonder that they can hear at all.

There seems to be a lot of confusion out there about the scientific cause of ear, nose & eyebrow hair growth as men age.  It seems a little strange to me that such a seemingly simple thing would be without strong, conclusive data.  But then like one writer so elegantly stated, “I sure wish the people who publish the relatively small number of ear-hair papers had their acts a little more together.  But it’s not like counting ear hairs is a job that’s going to attract the great minds of our times!” 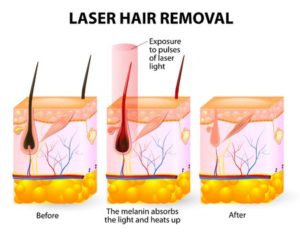 Another researcher stated, “Theories of causation abound, as unproved theories tend to do — age-related changes in hormonal levels of testosterone or estrogen or both, genetics,  bad mojo — but the experts concur on this: staring at an old guy’s shrubbery is a very bad idea, unless he’s asleep. “In fact, Pops is a likely culprit.

Dr. Edward Schneider, professor of gerontology at the University of Southern California, said,  “Just like there is a genetic component to hair loss and to the graying of hair, there appears to be some genetic basis for this growth of ear hair, too.”

Beyond that, all is darkness unlit by science. “There’s really no one,” Dr. Schneider says, “who has spent his life dedicated to nasal hair or ear hair.”  Dr. Sherwin Parikh of New York City’s Tribeca Skin Center does mention dihydrotestosterone (DHT) — which is what testosterone enzymatically converts to as men age and what causes male-pattern baldness — as a possible factor.

“It’s theory,” says Dr. Parikh. “It’s scientific theory that has yet to be investigated with any vigor. But it probably has a lot more to do with [your] father and grandfather than the hormones.”

One thing I hear over and over again is that if a man cuts his ear, nose & eyebrow hair, then they will grow back thicker, faster and stronger.   I am surprised how many people heard this many years ago and still believe it today.  It is 100% a myth!  Cutting or trimming hair in no way causes it to grow back thicker or faster.  This could possibly be influenced by the fact that men’s ear, nose & eyebrow hair grows faster as they get older.

The fact is that with both men who practice good grooming and keep these unsightly ear, nose & eyebrow hair trimmed,  and those who do not groom and trim these hairs—both have the same the same increased growth as they age.  Those who do not groom can really look offensive to most other people.  Nothing makes people gag more than ‘stuff’ which often clings to hair which is hanging out of some man’s nose.

There is confusion as to why these ear, nose & eyebrow hair grow faster and faster as we get older.  “I wish there was a good answer,” said Dr. Jeffrey Benabio of Kaiser Permanente in San Diego, Calif., a member of the American Academy of Dermatology.  Oddly enough, more research seems to have been done on why men lose their hair (treatment: expensive scalp creams) than on why they get too much of it (treatment: dime-store trimmers).

What is known, Dr. Benabio said, is that there are two kinds of hair:  vellus, which is short and fine in texture, and terminal. Terminal hair is heavier, a characteristic that intensifies at puberty in the pubic area, the underarms and, in men, on the face.

It also grows in the ear, nose & eyebrows.   As people reach late middle age, more terminal hairs appear. “It is normal and unclear why this occurs,” Dr. Benabio said. One explanation, Scientific American has reported, is that as men age, the hair follicles in the nose and ear become more sensitive to testosterone and also become bigger, producing larger hairs.

Several years ago when I went through this period of hair growth in my ears,  I did the only thing available at that time–electrolysis! Let me assure you how painful and expensive it was!   But I refused to go around with all that ugly hair growing out of my ears.  With electrolysis the technician inserts a needle into the hair follicle and then pumps an electrical current into it which terminates future hair growth….and it hurts like crazy!  But to me that pain and cost was far preferable to looking like I had no idea of how to groom myself. 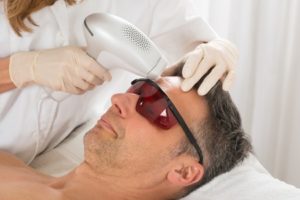 Today’s laser therapy is such an improvement over the old electrolysis.  The devise in the photo at the left is an example of how small and efficient a laser wand is in permanently removing unwanted hair. A friend of mine who had a terrible ear-hair problem, started going to a laser therapist once per month for about four visits. His results were truly amazing.

First, the cost was very reasonable. In Salt Lake City he found a technician who charged only $29 per treatment. Because hair grows in cycles, my friend went once every thirty days to catch these different cycles of growth.

Each time less and less hair cycled back and now his ears look absolutely fantastic. He is very happy with the results….and his wife is even happier.

One great side benefit is that the procedure is virtually painless. I went with my friend to one of his treatments and it only took 5 minutes….and he said all he felt was a slight sting when the laser light flashed. He said it didn’t bother him a bit.

Later I decided to do it myself so I could know how it compared to the old electrolysis treatments. There is absolutely no comparison! It is many times faster and I only felt that little sting each time the laser flashed on.

Finally the best part is that it is extremely effective.  It does remove permanently the unwanted ear, nose & eyebrow hair that all men hate so much.  This is a tremendous  example of how technology cam make our lives much better.

How Many Downtown Barber Shops Have FREE Parking?

How Many Downtown Barber Shops Have FREE Parking? If you haven’t[...]