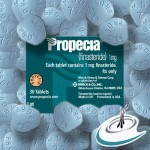 I thought that the medication Propecia would be better known among men in our Salt Lake City barber shop. Many conversations in the shop often turn to how a client can to about a man’s thinning hair  When I mention the messy Rogaine Liquid that is rubbed into the head, almost everyone knows what it is.

Most men usually respond negatively to Rogaine because they have tried it and it is very messy and difficult to deal with. But when I mention the name Propecia, there are very few men who seem to know what it is. So it might be good to start with a definition of what it is.

“Propecia is the first pill that effectively treats male pattern hair loss on the vertex or crown of the head and anterior mid-scalp area.  Propecia is an oral medication that you take once a day, with or without food, with or without medication, morning or night-it just doesn’t matter. You just need to take it. Propecia (finasteride), available only by prescription, is an exciting weapon in the battle against male pattern hair loss.”

As a barber in Salt Lake City,  I have several dozen clients who use Propecia.  All of them tell me that they are having positive results and that they will continue taking it to maintain the progress they have achieved.  It is so much easier to use than Rogaine or Minoxidil which are messy topical applications which have to be applied morning and night.  It is very easy to take the tiny Propecia pill with your vitamins.

I have one young client who recently had hair replacement surgery.  Hid Doctor prescribed Propecia for him to give the transplanted hair follicles the best possible chance to survive.
Finasteride is used as a treatment for both male pattern baldness and benign prostatic hyperplasia or enlargement of the prostate gland.

It contains an enzyme, which inhibits the conversion of testosterone to dihyrdrotetosterone.  What is dihydrotestosterone? It is a male sex hormone that is responsible for the stimulation of development of male characteristics, which includes the male organs and growth of body hair.

An overdrive of dihydrotestosterone or DHT can lead to shrinking of the hair follicles.  It helps stop the conversion of testosterone to DHT.  Researches have shown that it can effectively lower the DHT levels in the scalp by up to 60%.

In the chart to the left, DHT will gradually shrink hair follicles leading to “thinning and balding” hair.  Propecia blocks the negative effects of DHT causing the hair follicles to gradually grow stronger and bigger with continued use.

Even if you did not grow a single new hair, the existing hair you have should come in thicker and denser than it has in many years.  This is what my many clients who are using Finasteride are also confirming to me.  Most men seem to be really pleased with the results they have been achieving.

This is actually what makes finasteride very effective and the perfect solution for male pattern baldness.

It usually comes in 1 mg tablets and 5 mg tablets.  For most men the 1 mg. tablets work just fine.  The 5 mg. tablets will also work (but not five times faster) and might have some additional benefit for prostate problems.  Your Doctor can explain the difference to you when you get your prescription.

Propecia (Finasteride) is possibly the best alternative for most men who want to improve the quality and quantify of hair on their heads.  It is as easy as adding one more pill in the mornings with your vitamins.  All of the men I know who have been using Finasteride are quite positive in describing its benefits.

Men’s Dandruff: How You Deal With It

Men’s Dandruff:  How You Deal With It Men’s dandruff is[...]