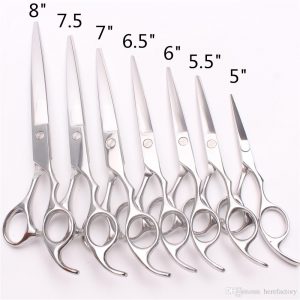 There are two types of barber scissors & shears. The French style which has a brace or finger rest for the little finger, and the German type, which does not include the finger rest.

We are one of the Salt Lake City barbers who choose the French-style barber scissors & shears with either a cast or screw-in finger rest. It gives a much greater feeling of control than those without it.

Barber scissors &  shears are composed of two blades. One is movable and the other is a stationary or still blade. These blades are fastened with a tension screw that acts as a pivot. Most barber scissors & shears are made from tempered stainless steel to ensure hardness and durability.

Barber scissors & shears are available in a variety of lengths, measured in inches and half inches. Most barbers whom I know in Salt Lake City barbershops seem to prefer the 6.5″ to 7.5″ shears.

The grind refers to the inside construction of the blade and the way it is cut in preparation for sharpening and polishing. The flat grind is usually associated with the German style shears, while hollow-ground blades are typically seen in convex shear styles.

The cutting edges of barber scissors & shears may be beveled, convex, or hybrid in design. The beveled edge means there is an angle on the cutting surface of the blade.  Beveled edges can be plain-ground with smooth, polished, or razor-edged surfaces. Beveled shears usually have one plain and one corrugated (serrated) blade. Beveled shears work well for blunt, shear point, and shear-over-comb cutting. 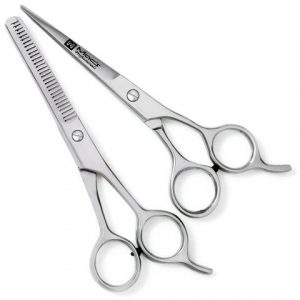 Convex blades with sharp angled edges help to facilitate a variety of cutting methods including sliding, slicing, or carving techniques. Barber scissors & shears that consist of a combination of edges are called hybrids.

A convex shear may have a beveled edge put on it. Although doing so creates a shear that is no longer truly convex and the benefit of the edge work may be lost, some Salt Lake City barbers prefer to utilize this option in blade edge design.

Thinning shears, also called blending, tapering, or texturizing shears, are used to taper hair ends, reduce hair thickness, or create special texturizing effects. These shears have comb like teeth on one or both shear blades, depending on the style. The notches created by these teeth help to control and portion out the amount of hair to be cut.

The greater the number of teeth, the more finely the hair strands can be cut without leaving noticeable cut marks. Thinning shears are also available in a variety of lengths and in detachable blade styles.

The 4420 blending shears (photo) are my favorites. It took me a long time to discover them and they have made a big improvement in my ability to blend any areas of my haircuts. They do subtle work to smooth out any minor weight lines or uneven areas in the hair. 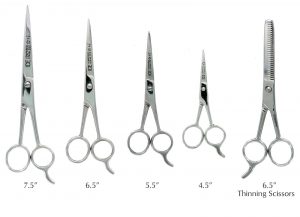 I much prefer them to thinning shears which have fewer and larger teeth and take a big bite out of the hair to quickly reduce volume. Thinning shears can often leave areas which are not smooth and even, and the hair often grows back in looking uneven.

I make sure that I cut at least 60% or further out from the base of the hair shaft. If you cut too close to the scalp it will usually create hair which is spikey and sticking straight out from the head. Most barbers I know in Salt Lake City would not want to make that mistake.

SHEARS OR SCISSORS?
The term shears is used to describe a cutting tool that is longer than 6″ with double-ground edges and two different-sized finger holes.

The term scissors is used when describing a cutting tool measuring less than 6″.

Both barber scissors & shears are serious tools and should not be dropped if at all possible. Even one drop on a hard surface can ruin the set of shears or scissors. You should protect shears in a leather sheath or holder when carrying them in a kit, bag or case.

Never cut anything but hair with haircutting shears. Avoid contact or prolonged immersion with corrosive chemicals or cleaners and disinfectants. Lubricate according to manufacturers recommendations.  If you take care of your barber scissors & shears they should provide many years of great service.

What Is An SLC Man’s Taper Haircut?

What Is An SLC Man’s Taper Haircut? There are essentially[...]

Straight Razor Shave v. Classic Face Shave Many of our[...]

SLC Trolley Square Barbers Open Every Day! Are there barbers[...]