The barber pole originated a long time ago in the middle ages and was related to the practice of bloodletting.  Barbers of the middle ages not only practiced shaving, hair-cutting, and hair-dressing, they also dressed wounds, set bone fractures, pulled bad teeth and performed surgical operations. They were called barber-surgeons. 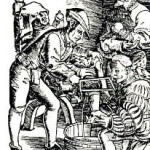 One of the most important functions of the barber-surgeons was bloodletting.  There were numerous reasons why patients were drained of their blood.   They believed that on occasion, a person produced an excess of blood–which let to many types of ailments such as headaches, fevers and even apoplexy.

When there was an illness, melancholia or if you just felt lethargic, you would go to the barber-surgeon , squeeze the pole to dilate your veins, and have some of your blood drained from your body allowing the body to make new and cleaner blood.

The barber’s pole originated from the rod that the patient gripped to make their veins bulge so they would be easier to slice open. A brass ball at the top symbolized the basin that collected the blood. The pole’s red and white stripes represent the bloodied bandages, which would be washed and hung to dry on the rod outside the shop. The bandages would twist in the wind, forming the familiar spiral pattern we see on the barber poles of today. The spinning barber poles were meant to move in a direction that makes the red arterial blood appear as if it were flowing downwards as it does in the body.  It is now the universally recognized symbol of the barber profession.  It can not be used by women’s salons or quick-clips unless they are fully licensed professional barbers. George Washington was conditioned by the times and was a patient of bloodletting. On the morning of 14 December 1799, he awoke complaining that he couldn’t breathe.

Fearing his doctor would not arrive in time, the first President of the United States asked for the overseer of his slaves to step in and bleed him. The cut was deep, and Washington lost nearly a half a pint before the wound was closed.

Eventually, the physicians arrived, and proceeded to bleed Washington another 4 times over the next 8 hours. By that evening the President was dead. One of his physicians, James Craik, later admitted that he thought the blood loss had hastened the President’s death.

By the mid-1500s, English barbers were banned from providing surgical treatments, although they could continue extracting teeth. Both barbers and surgeons, however, remained part of the same trade guild until 1745. In that year the surgeons split from the barbers and formed the Company of Surgeons that eventually became the Royal College of Surgeons of London in 1800.

Barbers as surgeons gradually fell out of fashion, and it is believed that the last barber-surgeon in England died in 1821.

The barber pole is one of the oldest and most iconic of business signs.  It is universally recognized as the sign of professional licensed barbers everywhere.